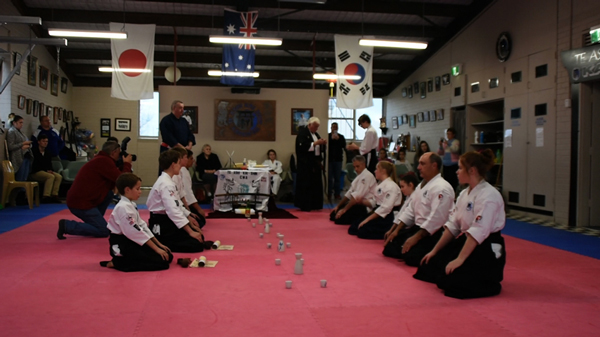 We are pleased to announce we now have 3 new Black Belts in the club. Sempai Jayden Webb, Sempai Isaac & Sempai Stan Hanrahan. Both Isaac & Stan are based in Narromine and train at the Narromine USMC. They also travel to Dubbo regularly to train as well. All participants at the Grading showed great endurance, committment and perserverance.

Hanshi Mike Ireland had this to say…

“It was an excellent grading. The three younger Karateka (Jayden, Stan & Isaac) put in a great effort throughout the 8 hour grading. I was particularly pleased with their ‘timoshi’ or spirit. After nearly 8 hours of Kata, techniques such as kicking, block, and strikes, weponary, self defense the students grading then had to complete 8 rounds x 2 minute sparring in Jayden’s case and 10 x 2 minute rounds for Isaac and Stan.”

Sensei George Sayers also successfully graded to his 4th Dan so now he is a Renshi. Congratulations Renshi George and the other Yudansha.

Over the years we have been fortunate enough to turn out many quality Black Belts.
Any idea how many Black Belts have come out of the TAKS Dojo? To be honest we probably should do a count – it would be an interesting little task.